Nautical Nature is a Maryland-bred son of The Factor, a multiple Grade 1 winner and track record-setting son of leading sire War Front, and he is the first foal from his dam, Atlantic Rainbow, whose second and third dams were both Broodmares of the Year.  He was bred by Housatonic Stables LLC, and raised at Shawhan Place in Paris, KY.

In breaking his maiden first-time out on October 20, 2017, at Laurel Park,  Nautical Nature became our first homebred winner.  He went wire-to-wire impressively in a $40,000 maiden special weight that day.  After hitting the board several times as a 3YO, he returned to the winner’s circle for the second time with a victory going 5 furlongs on the Delaware turf in September of 2019 at 4YO.  He was claimed away from us in his next subsequent start at Laurel and will continue racing for his new connections — hopefully with much success while we collect Maryland-bred Breeder Bonuses.

You can check out more photos of Nautical Nature here. 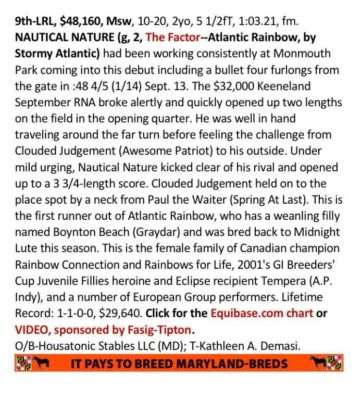